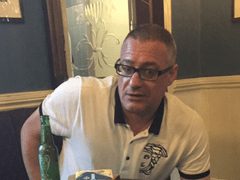 Being a bad ass is what most of us yearn to be in this business. The guy to the left?

HE IS THE BIGGEST BAD ASS OF ALL BAD ASSES!!!

Let me tell you his story.

You see, last week during the London attacks when three of the c**t terrorists were yelling “This is for Allah!” He, by his own admission, was a stupid shit and yelled, “F**k You! I’m Millwall!!” and started attacking the knife wielding terrorists with his bare fists.

The local football team. That’s soccer if you’re from the US and I’m not making this up.

Everyone else? They all ran to the back of the pub so he was left alone fighting these three.

Three terrorists with knives. Him with fists.

He was stabbed 8 times, but lived. Estimates are that he saved dozens of people from harm.

He was quoted as saying, “It was the worst thing I could have done.”

No, it was the most badass thing he could have done – and I had t-shirts made.

Hell yes I did.

I’ll be wearing them in London.

The night before will be epic. Mark Wardi and I will be holding a special event at the hotel pub and going over much of what we have learned being in one of the most competitive spaces in the internet. Where we hold 13 #1 rankings.

While it won’t be the same as listening to stories from us, drinking a dozen pints, and laying down face down in the gutter, Mark and I will be sharing our presentation when we get back from Ungagged.

how that domain was weak on CTR

how we made it go away

how we built a brand able domain

how we found the domains for our PBN network

which metrics to use and which to ignore

and a ton more cool stuff…